Becky Winburn……. That is a mouth full and for those who know her, you understand what I mean.  She is as determined in love as she is in life.  She gives with her full heart and gives without question.  She loves people and cares beyond but is okay just being okay.  No frills or pretension is coming from this girl.  She’s a down to earth as I know.  I moved to KY, new home, new state, new job and no “friends” and she was my first.  The first week I started my new job she befriended me and it’s been a blessing ever sense.  If you don’t know her, you should! 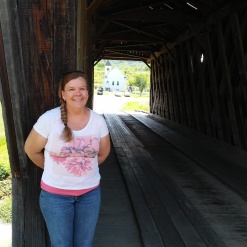 Like others who have told their stories I also was born into a Christian family. I was born Becky Sue Sams to Danny and Cecilia Sams and a big sister.  Although the nurse at the hospital insisted my mother could not name me Becky because it was a nickname my mother was victorious and I am Becky.  I was brought home to a small white frame house that sat just yards from the four mile marker on Muddy Creek Rd.  It was a safe haven and I was surrounded by Christian family and friends. My first memories of church were when we attended Antioch Christian church just a short distance from here. I loved bible school, Sunday school and Jesus at a very young age. When I was about nine we started attending church at Mt Olive Baptist down on Jackson Ferry. I remember having vacation bible school classes in a picnic shelter in the back. During that time was when I felt the call and gave my heart to Jesus Christ. I was baptized in the creek under the second bridge on White Conkright Rd., the one that is between where the old Allansville building stood and the house where Gilbert Wilder lived. My life was normal. Dana and I went to the pool and played outside all day in the summer and rode sleds and built snowmen and snowforts with our cousins in the winter. We attended church Sunday morning, Sunday night and Wednesday nights. My favorite thing of all to do though was to sit at my grandparent’s store that was directly across from our house and listen and watch. When I was twelve my dad bought a farm on Dry Fork Rd. Around that same time was when we started attending church here.  At first the move to the farm was not much of a change. We were still just a short distance from where we had lived and my grandparent’s store was within walking distance. My other set of grandparent’s moved into a trailer on the farm. Life was good. Well that is until my dad started raising burley. We had always had a garden and mom canned. Shelling peas and lima beans and breaking green beans seemed like work. Suddenly I found out compared to raising tobacco that that had been child’s play. We had a few cattle and two pigs, cut and burned cedars but nothing was work like the tobacco. That is where I learned hard work. I tell people that all that hard work and fresh air is what has me so hardy. As the song goes I was country when country wasn’t cool. Then oh my then, I became a teenager. I never missed church and truly loved the Lord with all my heart. I was a fairly obedient child, well at least I think I was, but my parent’s may disagree. I was involved in Sunday School, Acteens, I sang in church accompanied by my uncle Jimmy and many times sang with my cousin Rhonda Slucher. I read the missionary moments every Sunday morning at the beginning of the service, it was just a paragraph or so about one of our missionary families. I graduated from high school at sixteen. This would be where my story becomes one of imperfection. Like the scripture says…the spirit is willing but the flesh is weak. That summer at sixteen I helped teach my first VBS class with my mom. The five year old class, and boy were they ever entertaining. But little did I or anyone else know that long before MTV made the show “Sixteen and Pregnant” so popular I was in fact sixteen and pregnant. I started college that fall and on September 3 1983 I walked down the aisle in this very church as a child bride and married my high school sweetheart and became Becky Winburn. I had many imperfections in my life to this point but never one that would soon become so public. So it was that I delivered by c-section a daughter Whittney Dawn Winburn on January 6 1984.  She had delivery complications and her lungs collapsed and she had multi system organ failure. She was taken to UK hospital and after 21 hours of struggle she just couldn’t fight any longer. She died January 7 1984. My world stopped.We had no medical insurance and my husband and I were faced with a mound of debt that was shadowed by a mountain of grief. If my church family had been disappointed in me for getting pregnant before marriage none of it showed. They gave money to help pay the medical bills, they purchased Gideon bibles in her memory, they sent me a sunshine box so that I would feel their love for me. I clung to God like never before in my life. Even in such a dark time my farm girl raising kicked in and I picked myself up and moved forward. There simply was no other choice. I found strength in King David’s words 2 Samuel 12:20-2320 Then David arose from the earth, and washed, and anointed himself, and changed his apparel, and came into the house of the Lord, and worshiped: then he came to his own house; and when he required, they set bread before him, and he did eat.

21 Then said his servants unto him, What thing is this that thou hast done? thou didst fast and weep for the child, while it was alive; but when the child was dead, thou didst rise and eat bread.

22 And he said, While the child was yet alive, I fasted and wept: for I said, Who can tell whether God will be gracious to me, that the child may live?

23 But now he is dead, wherefore should I fast? can I bring him back again? I shall go to him, but he shall not return to me.

So like King David I picked myself up knowing that one glad morning when this life is over I will again see my precious Whittney. I found a job, finished college and after more than two years after her death, I was pregnant again. Three would come over the course of the next seven years. Kellen, Coleton and Ashton. Healthy, happy, handsome and beautiful. I would get up on Sunday’s and fight the fight, find the lost shoes, or other lost clothing and  get them all three dressed and ready and we would make our way to Allansville for  Sunday School and church. Somewhere in those crazy years between Coleton and Ashton I began teaching Sunday School for 1-3 and 4-6 grades. Over the years and in spite of my imperfections I have taught SS, VBS, children’s church, mission friends, been in church plays and so on. As life would have it the days turned to weeks turned to months turned to years and the babies grew up. Through fevers, runny noses, three broken arms, a broken ankle, a broken thumb, a couple of cases of pneumonia, numerous broken hearts and one gunshot wound, any questions on this can be directed to Coleton, they were raised. My sons have given me two beautiful daughter in laws one of which is named Whitney. It is amazing how God works. He has given me two Whitney Winburn’s to love. My other daughter in law Anna allowed my son Kellen to give their first born daughter his older sister’s middle name, so she is Kailei DawnWinburn. She is one of four amazing grandbabies, there is Grayson, Mckenna and Easton. They are gifts that I could not even dream of in my younger days. He has blessed me with a front seat to see what a great mother my own daughter Ashton has become. God has been faithful even in my imperfection. And as life would have it another very public imperfection was on the way. After 29 years my marriage failed. I gave my resignation as a Sunday school teacher and continued to come and sit quietly in the back row. The week that the divorce was in the local paper I noticed during the time of fellowship there were those who generally don’t make it back to where I sit had made their way to the back corner  just to shake my hand and ask how I was doing, never mentioning that they knew a thing. Although I felt unworthy and told him as much a very persistant preacher by the name of Ray Coates continually asked me to help with the children’s ministries again. So last summer I relented and accepted a position as a VBS teacher. Although attendance was low I realized how much I had missed teaching. When fall came around he ambushed me with reasons I should teach a Sunday school class again and I accepted. Yes as I said my story is one of imperfection but even more than that it is a story of grace and mercy extended to me by my Lord and Saviour Jesus Christ. My story can be summed up in this one scripture from Romans 3:23-24…. for all have sinned and fall short of the glory of God, 24 and all are justified freely by his grace through the redemption that came by Christ Jesus. So if someone asked me if God can use imperfect people to expand his kingdom I would first have to reference scriptural people, King David, Jonah, Moses and Paul come to mind. Then I would say that these walls that stand to each side of us would still only be mortar and brick, their would be no roof and the steeple would not be set in place for all to see who this building belongs to if not for imperfect people. There would be no hymns in the hymnals, no people in the pews to sing those missing hymns, without imperfect people the choir loft would be empty and collecting dust and cob webs and there would be no need for the baptistery that sits behind me. Yes I would have to say God can use imperfect people to do His will. I hope my story can encourage someone who thinks they are too imperfect, or sinful, or unworthy or bad for God to use. When we repent and believe all of our stories of imperfection can become this story from II Timothy 4:7-8 7 I have fought a good fight, I have finished my course, I have kept the faith:

8 Henceforth there is laid up for me a crown of righteousness, which the Lord, the righteous judge, shall give me at that day: and not to me only, but unto all them also that love his appearing

Henceforth there is laid up for me a crown of righteousness. Thank you Lord for the reminder of your goodness through friendships. Amen!

One thought on “One of Imperfection”